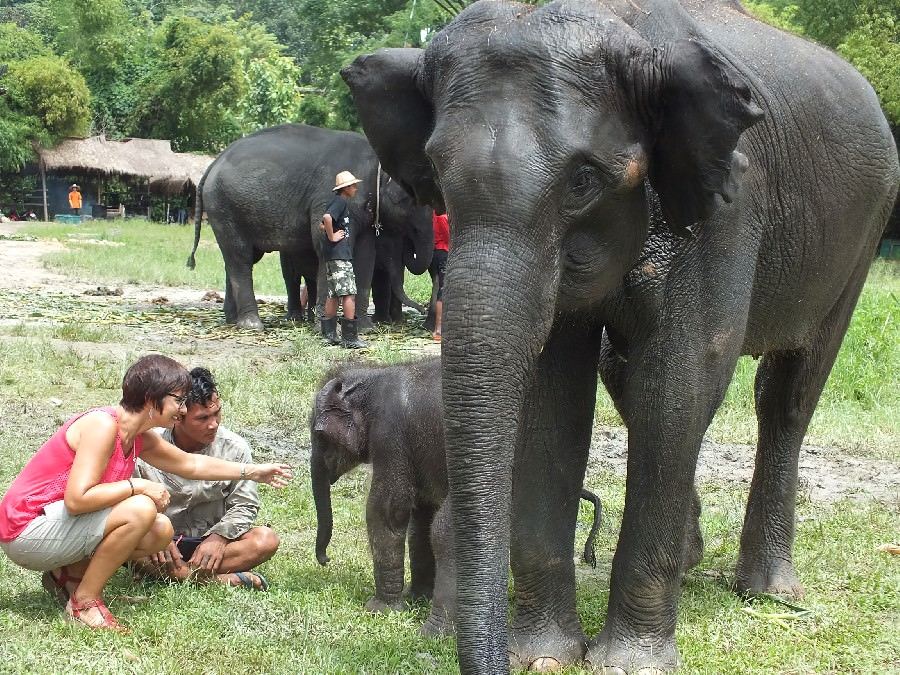 From this creature more than 300 related species evolved, some of them dwarfs and others enormous. By the time man appeared on earth, all but three had disappeared. One of these, the vast Woolly Mammoth, whose portrait appears in many prehistoric cave paintings, is believed to have made its exit from the scene about 10,000 years ago, possibly due to a period of climatic warning. This left only two, the Asian elephant (Elephas Maximus) and the African elephant (Laxodonta Africanna), both of which currently face an uphill struggle in a world increasingly hostile to their survival.

Asian or African, elephants have certain similar characteristics, most of them unusual. They are large of course – an adult Asian bull can weigh three to four tons and stand ten feet tall at his highest point – yet do seem cumbersome as they make their way on remarkable feet pads that expand and contract and allow them to negotiate jungle and fields, steep hills and marshland.

They are strong, capable of pulling heavy teak logs or carrying loads of about 600 pounds. They have the longest gestation period of any mammal, about twenty-two month, and are longest living except for man. They have very thick skin, though this does not provide quite such protection as many believe. They suffer great discomfort from all sorts of parasite who take up residence in the deep folds and wrinkles covering much of the body, which is why elephants enjoy frequent baths and coat them selves with layers of dust or mud whenever an opportunity presents itself.

Elephants are gregarious animals, travelling in herds of up to 100, though at present these have been much reduced. Within the herds are smaller family units, each consisting of about ten who follow the leadership of an older female and show considerable affection for one another, especially new-born calves and injured or ailing members. Male Asian elephants may wonder away from the herd, either alone or in groups of young, sometimes returning to mate but at other times going to new groups for this purpose.

They are entirely vegetarian. The Asian elephant’s principal diet is grass, along with the leaves and fruit of wild bananas, bamboo shoots, and the leaves, twigs, and bark of certain trees, while by contrast the African elephant eats very little grass and prefers soft fruits and the inner bark of trees. Whatever they consume, though, they require huge quantities of it – a captive elephant can eat five hundred pounds of hay and drink sixty gallons of water in a single day, and in the wild a herd can severely damage rice fields and other human plantations that intrude on it territory.

Like all animals, elephants also sleep, though precisely how much and when has given rise to considerable speculation. The truth, based on scientific studies, seems to be that they sleep lightly and only about half the time of most humans. They do it sometimes while standing and sometimes lying down, and while in the latter position they may snore.

The elephant’s most outstanding feature, both visually and in the uses to which it is put, it is long, flexible, extremely sensitive trunk, which ends in one or two fingers. With this remarkable appendage, an elephant can feed itself, suck up or expel liquids, pick up dust or sand, give a gentle caress, move extremely heavy objects, or, when so minded, kill an enemy. The tip of the trunk, the most sensitive part, is the source of the elephant’s keen sense of smell, as well as the means by which it speaks in a wide range or sounds to signal fear, rage, pain, pleasure, and, some think affection. The vital role played by the trunk in almost everything the animal does perhaps explains the popular legend that elephants are mortally afraid of mice. There is no evidence of this, though quite naturally they are concerned at the prospect of these or any other small animal entering and possibly injuring the trunk, so that in even in sleep they keep it carefully coiled up out of harms way.

An elephant’s tail is about a foot and a half long at birth and usually grows to about three and a half feet unless, as often happens, it gets bitten off in a fight. It ends in a tuft of stiff, hard bristles, which in some Asian cultures are made into rings that are believed to promote health and good fortune. They are also used as tooth picks. Elephant toe-nails, shaped like pears, are dark-colored at birth and almost creamy white later. Nails on an African elephant are considerable larger than those of an Asian species.

The life span of the elephant has been the subject of much misinformation, with various sources claiming specimens that have lived for a hundred or even more years. In fact, elephants appear to live about as long as the average man, enjoying full working strength from about twenty to forty-five and then declining. In the wild they rarely live past fifty, dying either by accident or, more prosaically, because their molar teeth have been grounded down by eating tough vegetation and, being unable to find enough soft forage, they starve to death. Despite its size and physical strength, the elephant is not immune from danger. Its hearing and vision are poorly developed. In the wild it may be killed by a snake bite or by a variety of wild animals. Evan a slight injury to the trunk causes intense pain and may result in death if the animal cannot feed itself. It is subject not only to such animal ailments as anthrax (the most dreaded) and foot in mouth disease but also to others common to humans like diabetes, pneumonia, and mumps.

Elephants can also be far more dangerous than most people who see them in zoos or demurely performing in shows might suspect. Though long trained for domestic purposes, they remain wild animals. The main offenders are bull, and the cause is often a somewhat mysterious condition known as musth, when an oily, foul-smelling liquid is secreted from a gland just above the eye. This may or may not be connected with sexual functions, but it is always a signal that the animal is under severe stress and should be watched carefully.

There are a number of specific differences between the Asian and the African elephant. The Asian species is somewhat smaller in overall size, with a less domed forehead, and more complex teeth. Its smooth trunk has a single fingerlike process at the tip rather than two. The ears are conspicuously different, being much larger on the African elephant. Only the males in Asia develop tusks, which are on average about five feet long, a pair weighing about seventy pounds. Both male and female African elephants have tusks, which are generally longer and thicker.

The Asian Elephant
Back to Top