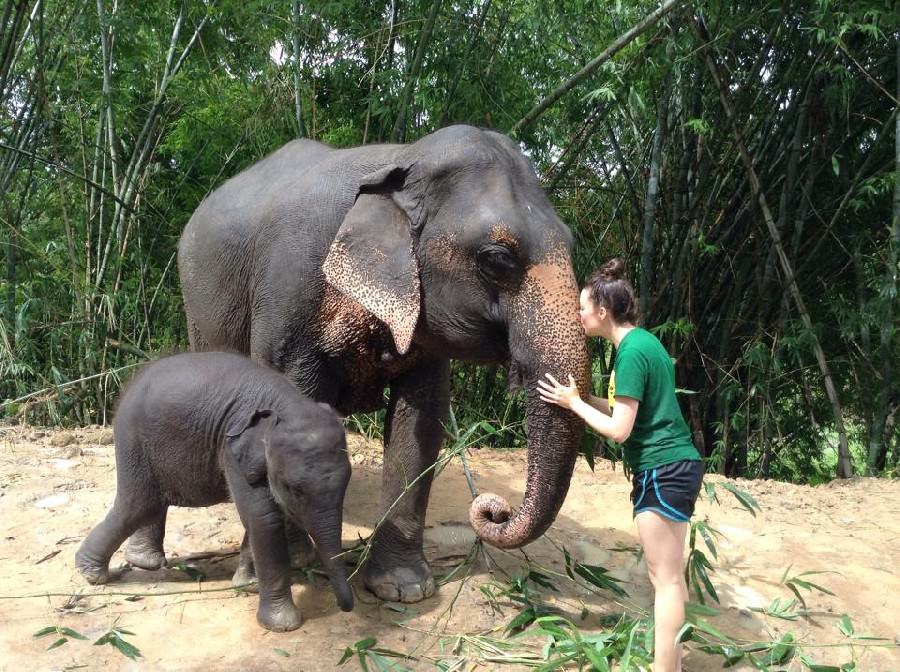 The first recorded elephant in Thai history occurs in a stone inscription traditionally thought to have been composed in 1292 by order of King Ramkamhaeng the Great of Sukhothai. Elephants of various kinds – tame and wild, sacred and mundane – figure all through this famous evocation of life in an idyllic kingdom.

Precisely when the Asian elephant was is debatable, but it was certainly before the earliest documented Indian civilization, about 4000 years ago. Some scholars believe the process could have developed elsewhere as well, perhaps simultaneously, perhaps even earlier, in other areas where wild elephants were abundant, such as Sri Lanka, Burma, Thailand, Cambodia, Laos, and Vietnam. In any event it is from the Indus Valley, in an area now part of Pakistan, that clear evidence of Domestication first appears in the form of seals and various other objects.

Rulers in many parts of Asia, including Thailand, measured their power by the number of elephants they could muster on a battlefield. These superbly trained animals, sometimes clad in leather or metal armor, bristling with weapons, ready to be guided into epic battles.

By the mid-nineteenth century, elephants were no longer being used for war in Thailand, but throughout the country – and even to an extent in Bangkok, where some of the first roads were built along old elephant tracks – their strength and skills were still being put to many uses. When the elephant was used for transportation, as the great majority were, passengers generally sat in a howdah, a chair – like seat tied to the animals back. These varied greatly in both comfort and workmanship. The simplest, used by ordinary people, were called sapakhab in Thai and consisted merely of a seat with raised sides and back and splayed legs, which those used by royalty, called phra thiang were elaborate roofed pavilions made of rare woods and often highly decorated.

Many Asian elephants were involved in the logging trade. The elephants were enrolled at the age of three to five in training schools. There they learned to get to know their mahouts and understand commands such as, lower its front legs, to stop, get up, crouch down, pick up, and move around. Over the next five or six years, they were taught such tasks as lifting logs with their trunks and tusks, pilling them up, and dragging selected logs through the thick, roadless forests to the nearest river. The logs thus collected were floated to an assembly point and tied into immense rafts for the long journey down to Bangkok’s sawmills. By 1904, some 1000,000 logs were arriving annually at Paknam Po, near Nakhon Sawan, the point where the Chao Phraya river begins and where they were graded and taxed.

The better logging companies took good care of the elephants they employed for these tasks, giving them a holiday to roam in the forest during the hottest months of the year, inspecting them regularly for any sign of ill health, and providing them with adequate supplies of food and water. Others, however, overworked their animals so that many died when they were around fifty years old, instead of the normal seventy or eighty years. In the late 1980’s, all logging in the Thai forest was banned by the government.

With their use in war, transport, and most other work effectively ended, Thai elephants today face a precarious future. Reliable estimates place the number of remaining wild elephants at between 1,000 and 1,500, about 200 of them at Khao Yai National Park on the fringe of the northeastern plateau and most of the others in such wildlife sanctuaries as Huai Kha Khaeng and Thung Yai Naresuan. Domesticated elephants are believed to number between 3,500 and 4,000.

Thanks to an expanding population and the consequent need for more land for farming, the wild elephant’s domain is rapidly shrinking, and only constant efforts by forestry and environmental groups can preserve even the limited territory still available. Newspaper reports in 1997-8 of elephants being killed by farmers whose crops they were destroying suggest that this problem is far from being resolved. Domesticated elephants present a different kind of problem, in a way even more complex. Here, on the one hand, is a treasured symbol of the nation, part of a rich legacy going back a thousand years. At the same time, it I a highly visible creature, very much alive, weighing up to six tones and requiring an immense amount of food every single day of its long life.

Various answers have been sought. The Elephant Roundtrip, an annual event staged in Surin Province by the Tourism Authority of Thailand, brings a hundred or more of the animals together for a popular demonstration of their skills and helps meet some of the expenses of their upkeep. Other elephants perform in shows staged at various resorts or carry tourists for a jungle ride through patches of remaining forests. Despite a recent law forbidding them, some mahouts from Surin also bring their animals to the traffic-clogged streets of Bangkok, earning money not only from tourists delighted by such an anachronistic sight but also from Thais who hope to earn good luck by walking under an elephant.

Assorted groups, too, have been formed by which domesticated elephants can be adopted or otherwise supported through public donations. But the essential question remains, and the ultimate future of the Thai elephant depends on whether long-term solutions can be discovered.

The Thai Elephant in History
Back to Top