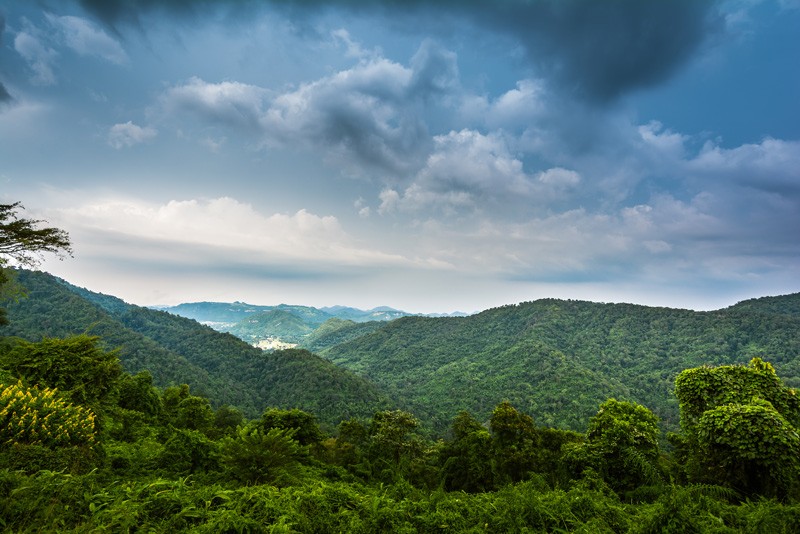 Khao Yai is no doubt the best national park in Thailand for regular visitors where it is relatively easy to see number of interesting animals.

The park covers an area of 2,168 square kilometres, including rain/evergreen forests and grasslands. 1,351 m high Khao Rom is the highest mountain within the park. The average altitude of the national park ranges from 400 to 1000 m above the sea level.

Some often seen mammals include elephant, macaque, barking deer, sambar deer,  gibbon, porcupine, civet. Other relatively common, but not often seen mammals are bear, gaur, otters, dhole, jackal, There haven't been any sign of tiger activity in the park for a while, but camera traps has revealed a significant tiger population in neighbouring Thap Lan and Pang Sida National Park. There is only one single siamese crocodile in the national park and it can be seen on the same location along the one of trails. According guides operating in the park, the crocodile was released to the park by the park staff in the past.

The national park is home to around 300 resident and migratory birds and has one of Thailand's largest populations of hornbills. Some of the interesting birds that can be found in the park are barbets, scarlet minivets, broadbills, pittas, mountain scops-owls, great slaty woodpeckers, collared owlets, blue-winged leafbirds, Asian fairy bluebirds, trogons, drongos and magpies. Many ground dwelling birds such as silver pheasants, junglefowls, green-legged partridges and Siamese fireback are common on the roads and trails. Best time to visit Khao Yai for birdwatching is during the dry months and during March April when the big bird migration happens.

Khao Yai is also a good destination for watching reptiles. The best time is around March-April but with still good activity until October, during the cold seasons it takes a bit more effort to spot them. Reticulated python, Ahaetulla prasina, Chinese ratsnake, Chinese water dragon, water monitor and crested lizards are only few of many species that can be found in the park.

To see a long list of species in the park, visit our Wildlife at Khao Yai page.

To see the elephant sanctuary at Elephant Retirement Park

The park is open 6 am to 6 pm everyday all year round, vehicles already inside the park can leave until late hours. The park is a very popular destination for both foreign and local tourists, it can be very busy on the week-ends and extremely busy on some holidays.

The main entrance is at north with nearest city Pak Chong in Nakhon Ratchasima Province, the second entrance is at south in Nakhon Nayok province. The entrance fee is 400 THB for adults and 200 THB for children. As of March 2015, Thai driving licence, work permit or student card holders can't get in for Thai price. When camping or staying at one of bungalows, the entrance fees will be valid for 3 days.

It is possible to explore the park by private car or motorcycle/scooter, but best experience gained by exploring via a tour company. Khao Yai is one of most popular destination for bikers in Thailand, frequently seen on the roads, quite often in groups. The Park visitor center is nearly 13 km from the northern checkpoint.

Private transportation - A single trip from any hotel/airport in Central Bangkok to north of Khao Yai costs from 2,300 Baht up. The trip takes around 2h 15 mins to 2h 30mins in good traffic. For more detail or online booking of private transportation visit our taxi detailspage.