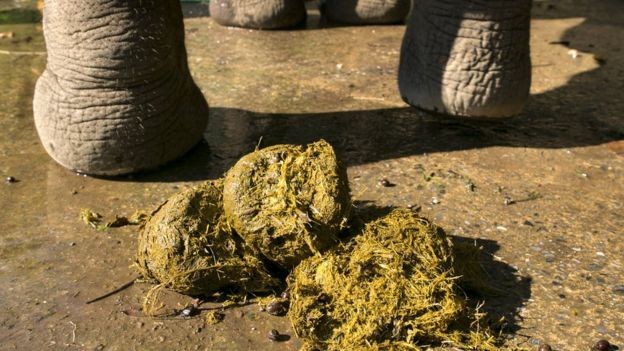 While elephant poachers are only interested in the animals' tusks, for Kenyan entrepreneur John Matano it is all about what comes out of the other end of the world's largest land mammal. This is because the 58-year-old collects elephant dung that he turns into high quality paper. And for a continuing supply of dung, he very much wants Kenya's elephants to remain alive and well. While some people might be a bit sniffy about the thought of elephant droppings being turned into paper, it is in fact a small but growing industry in the East African country, with 17 firms now involved, according to official government figures.

Kenya's elephant dung paper industry is centred on the Mwaluganje Elephant Sanctuary, a community-owned 36 sq km (14 sq mile) conservation area for elephants, 28 miles (45km) south west of the coastal city of Mombasa. The dung contains lots of broken down plant fibre. Making the paper started as a pilot project in 1994, before commercialisation began a decade later when local farmers such as Mr Matano set up their own paper-making businesses. The sanctuary itself was established in 1993 both to help elephants, but also to assist 200 or so local farmers.

The farmers had for generations had to put up with elephants from the nearby government-owned Shimba Hills National Reserve walking into their farmlands and eating or destroying crops. This resulted in serious and sometimes deadly conflicts between humans and elephants.

So the Mwaluganje Elephant Sanctuary was established adjacent to the national reserve, with financial assistance and support from the United States Agency for International Development, and UK animal charity Born Free Foundation.

Don't pooh-pooh it: Making paper from elephant dung
Back to Top