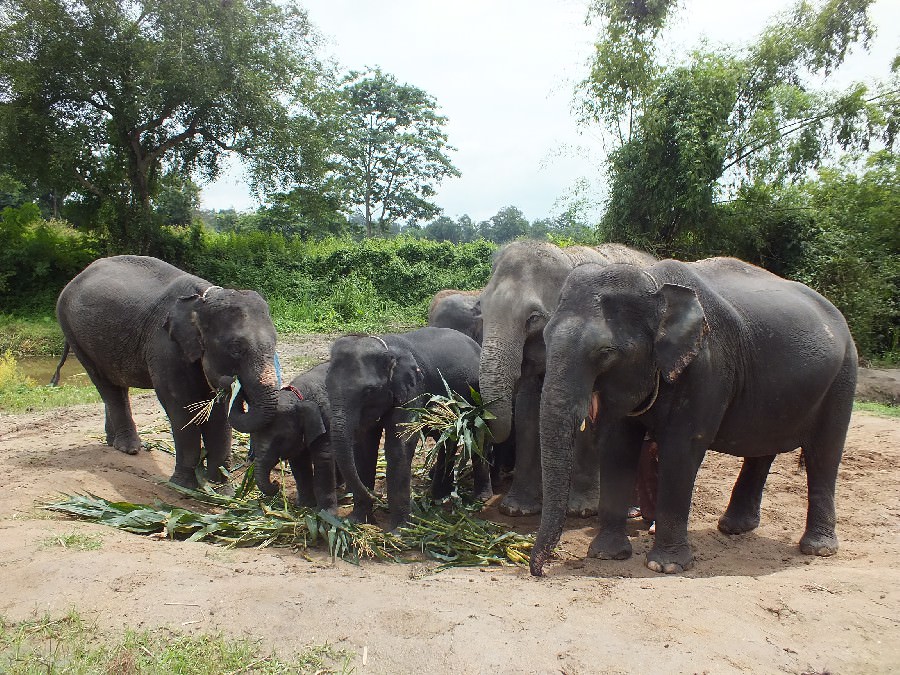 In the year 1900 Thailand might have had as many as 100,000 domesticated elephants, and perhaps as many as one man in fifty might have worked at least part time as a mahout, a rider or elephants. An elephant walking through a village would have excited no more attention than a ten-wheeled truck does today.

The number of domesticated elephants (sometimes misleadingly called tame or work elephants) is presently in a steady, inexorable decline. In 1994, according to statistics of the Local Administration Department of the Ministry of Interior, Thailand had about 3,500-4,000 domesticated elephants, considerably down from the 5,232 listed by the same agency in 1980. The province with the most elephants is Tak, which had 740 listed in 1994. This is a fact which inevitably surprises Thais, who automatically assume that it must be Surin, home of the world famous Elephant Roundup. (In fact, Surin only has 160 elephants.) The north has about 2,600 elephants, or two-thirds of the national total. Although many northern elephants might be recent immigrants, particularly from the northeast but also from the south, which has suffered a precipitous decline to fewer than half of the animals it had in 1980.

Of the eleven Asian countries with domesticated elephants, Thailand is one of the big three, second only to Burma’s approximately 6,400 elephants and slightly ahead of India’s 3,000. These three countries collectively hold about 80 percent of the world’s total of 17,000 Asian elephants. Compared to other countries, in Thailand the proportion of domestic elephants to wild elephants is very high, about 280 percent. Which indicates massive past capture. (even in elephant-rich Burma domesticated elephants only slightly outnumber wild ones.)

Thailand presently has between 1,600 wild elephants (about three percent of Asia’s population of 38,000 to 48,000), with the largest number in two main areas, Khao Yai National Park and also the Thung Yai And Huai Kha Khaeng Wildlife Sanctuaries. Wild elephants are nearly everywhere threatened by habitat destruction, which constantly eats away at their living space. Poaching occurs, especially of bull elephants being hunted for their tusks, and elephants have just begun to be killed in response to crop raiding.

The Asian elephant is an endangered species and thus even elephants in domesticity are fully protected under a treaty called CITES. Conservation and management is more difficult in-country, however, because by law domesticated elephants are private property pure and simple, classified along with cattle, water buffalo, horses, donkeys, and mules under the Draught Animal Act of 1939, a law concerned solely with the right and obligations of ownership.

Elephants are required to be registered with the Ministry of Interior’s Local Administration Department, but the LAD has no expertise or capability in veterinary care. Current registration procedures gather so little information that it is impossible to determine average age, work performed, income produced, health, the nature and amount of international trade, etc. The domesticated elephant is specifically excluded from the Wildlife Protection Act 1992, which would place it under the jurisdiction of the Royal Forest Department.

The only elephants which can be said to belong to the entire nation are the eighty animals owned by the Forest Industry Organization, a state enterprise which runs the Thai Conservation Center in Lampang. In partnership with an NGO, the Friends of the Asian Elephant, FIO runs an adjoining elephant hospital – the first in the world – which treats severely injured and ill elephants.

Economically, from being a prime symbol and creator of wealth, many elephants have become almost a liability since it is now very difficult to eke out even a bare living except in illegal or unsuitable work. The traditional price structure has turned topsy-turvy, with calves being amongst the most expensive animals whereas they used to be very cheap because they can do no heavy work. While most elephants have declined greatly in value, a few classes have greatly increased because of their rarity – very young calves, very docile and beautiful tuskers, and good performers. Some of the best logging elephants have probably been sold into Burma and Loas.

The most frightening immediate threat to elephants is undoubtedly a grave and rapid decline in the quality of the mahouts. Many tribal keepers have left the profession and the sons of many mahouts are choosing other kinds of work. Increasingly, being a mahout has become the job of very young men with no prior experience, resulting in the deaths of many men and ultimately many elephants, shot because there is no available mahout with sufficient skills to control them.

The picture is grim. As the most developed of Asia’s elephant-keeping nations, Thailand is also the hardest hit by unemployment, poor mahoutship, changing values, etc. As the holder of the second-largest population of such nations, Thailand faces even greater problems than India and Sri Lanka, although they are in very similar circumstances. Since all but a handful of Thailand’s nearly 4,000 elephants are privately owned, providing positive support will surely prove to be very expensive.

Yet there are some bright signs. Thailand’s domesticated elephants are lucky to be supported by a few excellent NGOs. Unfortunately, limited by meager resources and manpower, the NGO’s efforts, however heroic and important, can make but a small dent in the physical problem – although they do serve an invaluable function in education and in raising public awareness. Several government agencies are also beginning to realize the extent of the problem, and the National Identity Board of the Prime Minister’s Office has established a co-ordination committee.

The Thai Elephant Today
Back to Top